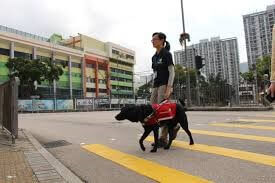 Man’s best friend: the dog. Many of us had a beloved pet growing up, who was there during all of the good times and the bad. A thunderstorm, sickness, or that first break-up, but did you know that dogs are capable of so much more than slobbering on that new couch and eating that sandwich you accidently left on the table?

Specially trained guide dogs have been assisting visually impaired individuals since the mid-16th century, with more popularity growing during the First World War, when Germany started a training program specifically for wounded soldiers who had been blinded during combat. The program was then brought over to the United State in 1927 and has grown globally ever since.

Dogs go through careful selection and training before becoming guides. As a puppy, the dog goes to a training facility where they teach them important obedience skills, expose the puppy to different people and environments, and give the puppy love and attention to ensure that it grows up a happy and confident dog, ready to be a guide. The individuals at the training facility lay the groundwork for the training the dog will soon go through.

Next comes extensive training at a special school that can last up to two years. They teach them different skills, like how to walk similar to a trained guide dog. This means keeping pace with their handler, walking at a comfortable distance, and responding to leash corrections. They also learn how to stop at curbs and handle themselves around other people and traffic.

They are carefully trained to lead their owners safely around obstacles, and the dog and its owner form a close bond, essentially become a team. The handler’s role is to provide directional commands, while the dog’s role is to protect its owner by avoiding obstacles and hazards in their path.

Guide Dogs do things a cane or GPS device could not do. Most individuals who are blind who use canes use other senses, such as hearing, to detect traffic. However, that cannot protect them from drivers who disobey traffic laws, like running a red light. Guide dogs cannot see traffic signals, but they often use selective disobedience and instinct to sense dangers, such as a fast moving cars or bikes.

Guide dogs allow those with a visual impairment to live a fulfilling life by assisting them in everyday tasks. The majority of guide dog owners have reported a feeling of increased confidence, independence, and mobility with their dog. Having their guide dog gives them more freedom to go out for a walk or go to the store on their own. Small tasks that the sighted often do not think twice about doing.