Sports and Recreation Essential for Children with Visual Impairments 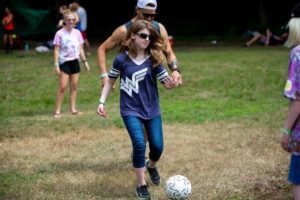 Approximately 70% of children in the U.S. who are visually impaired do not participate in a physical education curriculum due to lack of adaptive sports and misconceptions surrounding their abilities.

Because many physical education teachers do not realize that visually impaired students can take part in sports, children with impairments are often given the role of scorekeeper or timekeeper. Imagine not being allowed to participate in the normal activities your classmates are, this can cause a strong feeling of isolation and self-doubt.

There are many sports and recreation activities that have been adapted specifically to include both blind and sighted students.

Beep baseball, for example, is similar to regular baseball, but all of the players are blindfolded, except the pitcher. Auditory bases and a ball with a sound cue are used to alert the players.

Goalball, which is the most popular sport for the blind and originated in 1946, is a team sport played on a court similar in size to a volleyball court. The game is played with two teams of three; each team faces each other across the court.  The object of the game is to roll a basketball size ball with bells inside across the court and into the opponent’s goal. The defending team uses their bodies to block the ball. If the opposing team stops the ball and obtain control of it, they become the offensive team. All players must wear black-out goggles to ensure everyone is on the same playing field.

Incorporating adaptive sports into a physical education curriculum allows the visually impaired students to learn important life skills, such as teamwork, perseverance, and commitment. By including them to participate in the same activities gives them a feeling of acceptance and helps build their self-confidence. Being told they “can”, instead of “can’t,” will empower them through every accomplishment and assist with improving their self-esteem.

There are many ways to adapt different sports for those who are visually impaired. Here are a few fun ways: