We all have dreams, a “bucket list” of goals to achieve and experiences to discover. For most of his life, Frank Manderson dreamed of skydiving. While that’s not an unusual goal, it’s one that presented a greater challenge for Frank than it would for most people, because Frank is visually impaired.

Frank describes his vision loss as “a slow, gradual process,” the result of his mother’s bout with measles during her pregnancy. While he always had poor eyesight, it wasn’t until early adulthood that Frank’s vision loss became a problem. At 20 years old, he joined the Army along with a couple of friends. Already pursuing his skydiving dream, Frank wanted to become a paratrooper, but was rejected because of his vision. Eventually, he received a medical discharge from the service.

But Frank was still able to work. After his discharge, he returned to Utica and found employment with Utica Cutlery. Fourteen years later, the company downsized and Frank was laid off. Although he tried to find work, he eventually gave up. “I couldn’t find a job in the area because of my eyesight,” he recalled. “My vision had gotten so bad, I went on Social Security.”

To stay occupied, Frank began doing odd jobs, like making picnic tables and refinishing furniture. “I’m the kind of person that always has to do things to keep my mind busy,” he said. Furniture refinishing often required upholstery work, and Frank discovered that he’d need to do some sewing. That’s when he was pointed toward the Central Association for the Blind and Visually Impaired (CABVI) and Luca Esposito. “Luca Esposito said, ‘Come on down. We’ll give you a hand and get you some training on some sewing.’ And that’s where it started.”

At that time, CABVI was in its old Court Street facility and sewing was the only employment opportunity offered by the organization. Though he appreciated CABVI’s help, Frank didn’t think that sewing was something he wanted to do full time. But several years later, CABVI had moved to its present location on Kent Street and had grown to provide a variety of manufacturing jobs. The time was right. Frank said he had become depressed and had begun to question his value. “I didn’t know what my next step in life was going to be. I didn’t know where to go, what to do,” he recalled. With his family’s encouragement, Frank reached out to CABVI again. “They opened up a door for me,” Frank said.

Though he was a little intimidated about returning to work after many years, Frank said that CABVI gave him the support he needed. “Whatever I thought I could do, they gave me the chance to do it.” He started in the glove department, and eventually worked in other departments, including several years operating file-folding machines. “They stood right behind me all the time,” he said. “They lifted my spirits up. They really brought me back to life. I could look down the road and see a better future.” 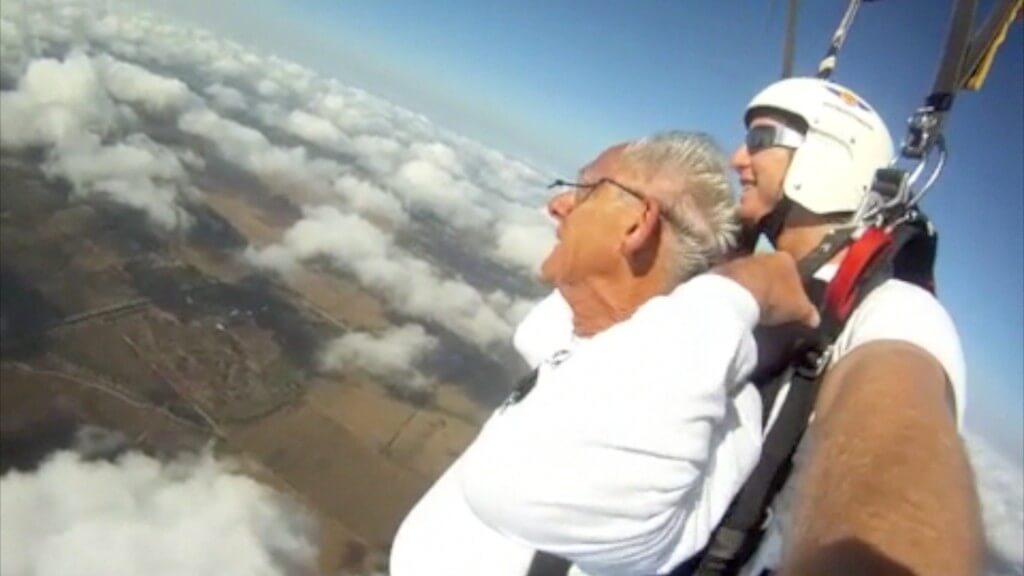 And CABVI provided Frank with more than employment. When he first returned to work, he still had partial vision. But after nine years with the Association, the “slow, gradual process” was complete – Frank was totally blind. CABVI staff taught him mobility and other adaptive techniques, and during his 14-year career at CABVI, Frank used his experience and renewed confidence to inspire others. “I was able to train a lot of people on different machines, try to build their spirits up, encourage them, joke around and have fun with them – doing things that just made them feel more comfortable.”

Even during his retirement, Frank continues to provide encouragement and support to people with vision loss. His most common piece of advice: “Don’t be afraid. Fear itself is the only thing that can hurt you. Life is too short. And we all need to have that happiness in our hearts.” On his seventieth birthday in February 2013, Frank took his own advice to heart and fulfilled his lifelong dream of skydiving. He gave CABVI credit for providing him the self-assurance he needed to reach his goal. “They’ve given me so much courage, and so much uplift and confidence through the 14 years that I worked here that it’s stayed on with me.”

In fact, Frank said he is so grateful for the positive impact CABVI made on his life, he originally wanted to organize a benefit around his first skydive to support children’s services at the organization. Because central New York winter weather made a Utica jump impractical, Frank’s plan didn’t work out and he decided to skydive near his current home in Florida. But he said that during his 45-second free fall, he had CABVI on his mind.